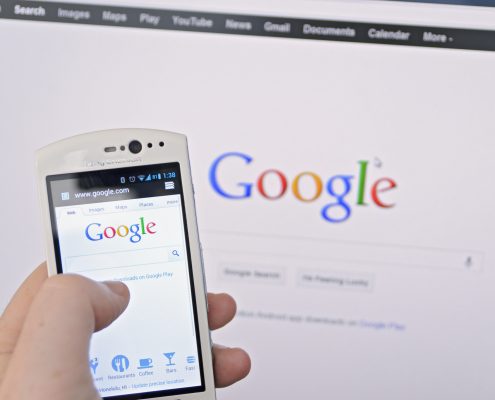 We have put together all the information we could find to answer the 13 questions you have asked.

Google has announced a new version of how they rank its search listings called, mobile-first index. In a short summary, Google will now rank its listing constructed by the signals received by the mobile form of a website’s content. Currently, the rankings are now listed centered around the desktop version’s content. In the recent growth of mobile users and mobile driven searches, Google is ready to unleash a more ~accurate~ way of ranking according to their analysis.

Confused about how this all works? We’ve got you covered.

Since the news dropped, we’ve tracked all of the most frequently asked questions that have come up because of the changes that may affect the industry. If you’ve been wondering how this will affect you and your business, see below for a list of Q&As answered by Jennifer Slegg, Jenny Halasz and our SEO company Rise Atlantic.

1. What Is Changing with Mobile-First Index?

We’ve legitimately entered the age when most searches are happening on mobile. Google has finally entered the motion of adjusting their index results to embody the mass number of users from mobile devices.

Google is starting (or rather have started) the use of the mobile-first index in place of its current desktop-first index. The search engine results performed by indexing is a compilation of the pages and documents that searches have found, simply by crawling through web links. Up until now, this was only done through a desktop view. Google has now shifted into a mobile view and is only sifting through those links to prepare more accurate mobile searches.

2. If I Only Have A Desktop Site, What Then?

Don’t worry, said Google. Although you may only be buying yourself a bit more time now, Google does want all its users to switch to a mobile version as well, in the near future. But for now, it will continue to crawl (or index) your site just fine. Meaning, it will use the information from your desktop site in the ranks. Google says, “If you only have a desktop site, we’ll continue to index your desktop site just fine, even if we’re using a mobile user agent to view your site.”

If you do have a site compatible with mobile, Google wants to ensure you do not leave any information out from your version by desktop when switching to mobile. This is so Google can use the proper amount of information on your mobile website as it did previously on the desktop form.

Meaning, be wary and don’t try and summarize too much valuable information from your desktop version, because you may be losing precious text/keywords that could help you rank higher in Google searches.

3. Should I Be Worried If I Have More Content on my Desktop Version Than My Mobile Version?

Possibly, yes. Google says it will use the content form of your mobile website only (if you have one). If you have fewer words (for simplicity) on site A (mobile version), Google will unfortunately only see that version when crawling through content for ranks, not the desktop form of site A.

Google is now recommending its users to go with an approach that won’t summarize the mobile version of your site. This will allow every piece of content from every page to reflect exactly as it does for mobile. Google doesn’t want you to lose out on valuable content. At this point, it’s better to leave in all information you have on the desktop version of your site and convert it exactly for your mobile version.

4. Will The Expandable Content Be Affected On My Site ?

In the past (technically in the present as well), Google has said that expandable content which includes hidden tabs, boxes with hidden content, accordions and much more weren’t weighed as high. Gary Illyes from Google has said that all this information listed above, plus some, will be tested fully in searches. The idea behind this will allow the mobile version of your site to weight heavier in search results, as opposed to how it’s being indexed now.

This is actually a great thing. Now, all that information that you’ve hidden in different tabs, drop-downs, etc. will be weighted just as high as any other content, not hidden on your mobile site. This means your mobile site may actually have more content for Google to crawl through and rank.

5. Will Google Rankings Be Affected A lot?

Google’s Paul Haahr and Gary Illyes are confident this won’t affect Google rankings. In theory, Google wants there to be little to no effects around this modification. It is, however, too soon to tell what exactly might happen with the ranks. However, it doesn’t hurt to take action and adjust according to how Google’s indexing is changing.  Rankings will not be affected if your site is currently mobile ready and fast.

Site speed will have a huge impact on how you are ranked in the new mobile index.  Mobile speeds are a lot slower then when you are connected to a network and bandwidth is at a premium so Google takes this into account when ranking your site on the new mobile index.  Google wants your site to load at an average of 3 seconds a page.  You can check your pages at a https://gtmetrix.com.

6. Will This Boost Mobile Sites?

With this new index, this version will crawl through mobile sites only. In the past, content that wasn’t considered to be mobile-friendly would not have ranked as well.

Currently, the indexed information that comes from desktop version websites indicates where you rank in searches. Users will still get these types of results if you do not have a mobile site. In the current version, the results you find while searching on mobile has only been indexed through desktop versions of those sites.

Then, a friendly mobile ranking structure is applied to enhance signals for Google’s mobile ranks. Google will use its mobile-first index to show catalogs for both mobile and desktop users.

The friendly mobile push will be implemented, along with what is being used currently, onto mobile-only pages. In turn, yes, this can potentially rank your mobile version higher if the content you want to convey is on your mobile version, so don’t hold anything back.

7. Can Google Even See the Pages I have on Mobile?

Try Fetch and Render, a tool in which you can find in the Search Console in Google. It can show you exactly what Google sees on mobile. When you specify mobile: smartphone, you can exactly see the preview of your mobile version of your site and use the tool for fixing up your site, if needed. If you find that you have missing content from your desktop version while reflecting it onto your mobile version, be sure to act immediately to ensure all needed information is shown on both platforms. Once you feel confident enough with the changes, run the tool again to confirm.

8. Will Ranking Signals Come from My Mobile Version Only?

As we mentioned previously, Google only ranks your site for its current mobile users, using only the signals your desktop version provides. This will completely change, Google will use the signals it gets by crawling onto your mobile site exclusively, to show results and prove its rankings on both desktop and mobile.

Google will also use the information and signals it tests from looking at your H1s, tags, titles, structured data, speed and much more. This information that will be taken from the mobile version will be used over the information it takes from your desktop site.

But, doesn’t that just mean Google flipped indexing from desktop based results to how it views your mobile version? Yes, however, Google is well aware and in this change, it hopes that the mobile user based searches will grow immensely over searches with a desktop.

9. Will There Be Different Catalogs for Desktop and Mobile?

Ultimately, Google is trying to consolidate its indexes into one. This one consolidation will be dependent on mobile signals. During the time in which this version is being tested, Google will be using two indexes, the mobile-first and the desktop-first. It is said that only a small group of people will be tested on only mobile-first, however, those people and all the rest won’t have a clue what indexes they’re operating on.

As unlikely as it may be, Google could possibly revert back to just using the desktop-first index if the mobile-first fails during its testing period. However, Google seems to be self-assured in its testing and finally will roll-out this new index in the upcoming months which will take over for all searches, including desktop.

In Google’s blog post, they mentioned, “Our search index will continue to be a single index of websites and apps, our algorithms will eventually primarily use the mobile version of a site’s content to rank pages from that site.”

There is some apprehension about this new index because as many know desktop content has the capacity to have more links and content than mobile content, simply for minimal and simplistic looks. This concern is related to the question revolving around mobile having fewer signals in general in comparison to the desktop versions of the same sites.

We all know Google searches are contingent on the signals and links it receives from desktop sites. If these types of signals are affected or changed, how will the ranks be affected?

There’s no authentic answer to this. Google says their teams are continuing to examine this theory. Gary Illyes said, “I don’t want to say anything definite about links yet. It’s too early for that cos things are very much in motion.”

11. Canonicals: What Needs to Change?

Canonicals don’t necessarily need to be changed, said Google. However, be cautious and maintain your canonical tags as they are now. But, be sure to read their blog post and respect their suggestions for this, as mentioned.

12. When Will This be Implemented?

Google has announced they’ve already started analyzing the mobile-first index to a certain amount of users. Although they do say this will take some time to fully be implemented, we are expecting it to be possibly a few months. However, since they’ve already started testing, our theory is they will continue this testing era and just tack on more users with this form of indexing. Over time, this will be official once Google is fully confident with this mobile-first index.

13. Can the Impact Now Be Seen in Search Results?

Keep in mind, this is a worldwide Google implementation, so it won’t be skipping any certain territories. This, in time, will affect Google internet searches as a whole.

We hope to have answered any burning questions you may have had on Google’s mobile-first index! We’re excited to see the official rollout in the coming months.

If you are not on the first page of google then you’re loosing out on 90% of the traffic, Check out our home page https://www.riseatlantic.com for more information on how we can help. Or come see us at Saint John SEO google plus page.